RISE UP! Youth and Direct Action
A Workshop on Civic Engagement

This day-long interactive workshop for students in grades 9 to 12 will teach the fundamentals of First Amendment rights to free speech and freedom of assembly; how to petition the government for change; how to operate a non-hierarchical organization; how to develop effective messaging; and how to create a safe, non-violent, effective direct action. Presenters include Jamie Bauer and Jay W. Walker. Students will be provided with a healthy morning snack and lunch.

The People’s Forum policy requires that students show proof of vaccination or a rapid home test taken within 24 to 48 hours before the event. 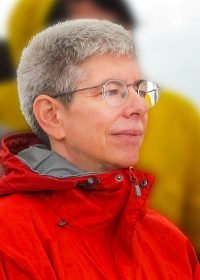 Jamie Bauer (They, Them) trained over a thousand ACT UPers in nonviolent civil disobedience over the six or seven years that ACT UP was most active and remains one of the foremost trainers in the progressive movement to this day. Jamie went to MIT to study civil engineering, architecture and urban planning and earned a Master’s degree in transportation, which had a one-in-eight women-to-men ratio. In 1981, they returned to New York to work for the MTA, eventually as director of subway schedules. About two decades after their time in ACT UP, Jamie started to live as nonbinary. In the early 1980s, Jamie joined Women’s Pentagon Action, a mobilization to create a large women’s peace action directly confronting the Pentagon that included Grace Paley, Vera Williams, Eva Kollisch, Donna Gould, Sharon Kleinbaum, Toni Fitzpatrick, Laura Flanders and Harriet Hirschorn, among others. Jamie learned a lot about organizing, dealing with the police, insisting on the right to take space, and everything about doing politics on the street. 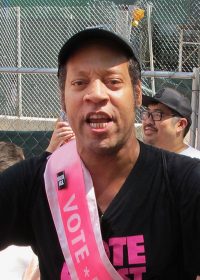 Jay W. Walker (He, Him) has been involved in activism surrounding LGBTQ+ and HIV/AIDS issues for over 20 years. In 1998, he helped form the October 19th Coalition which used direct action activism to raise awareness of hate crimes targeting LGBTQ communities. He also volunteered with GMHC’s NY Citizens AIDS Network legislative public policy initiative. A founding member of Gays Against Guns and Rise and Resist, and a co-founder of the Reclaim Pride Coalition and The Queer Liberation March, Jay has conceived, produced and co-produced numerous fundraising events, public awareness campaigns, rallies, marches, and direct action protests focusing on hate crimes, gun violence prevention, HIV/AIDS, Anti-fascism, and to protecting and restoring our democracy.